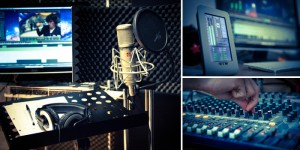 Audio spots are short audio advertisements, as complex as you choose, commonly used in radio and television stations, the Internet, shopping centres and telephone networks. Audio spots are also used in mobile advertising which consists in promoting products and services through messages that are most often broadcast from a car and are usually accompanied by a graphic display. The most frequently used lengths of audio spots are: 15, 20, 30 and 40 seconds.

The production process of an audio spot consists of:
– creating the script
– selecting a suitable voice (one or more) and recording it (in several versions)
– selecting music and sound effects
– editing and mixing the entire material (in the case of television advertising – synchronization with the image)
– sound mastering (sound unification of all components of the spot and adjusting sound and volume according to the current standards)
– generating the broadcast file / files for the radio station
– preparing the production metric (providing the client with broadcasting rights)

We also create advertising songs with music composed specially for the client.